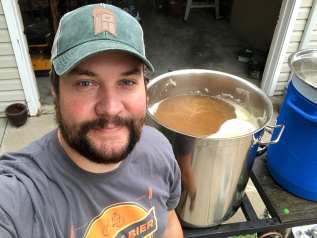 My name is Matt McRoberts and Ornate Brewing Co is the name of my home brewing setup.

Starting out in the Fall of 2010, I finally began home brewing. After reaching out to the local home brewing club, I was invited to attend one of their meetings and it all began from there. I became friends with Zac Paddock, who I began brewing with over the next couple years. We were both still learning a ton, but our beers continually got better each time.

Zac and I brewed quite a few beers together. We did partial mash, all grain, 5 gallon batches and even a few 10 gallon batches. The brewery setup we used was a bit ghetto, but it worked and we made beer. We even made a couple batches that were served to the guests at my wedding!

Brewing with Zac didn’t last forever though. He finished up his Phd at K-State and was offered a job up in Alberta, Canada. It was a great opportunity for him and his family and he jumped on it! Trying to keep his move simple, he offered to leave some of his home brewing gear with me because he knew that I could use it and I’m so glad he did. Having my own brewing setup at home really enabled me to start and maintain a constant pipeline of beer.
​
I finally had my own brewery!

It was very simple. It needed a lot of work. There were things that I loved about it and there were things that I despised about it. In the end, beer was getting made and I even won my first medal at competition with that system. I was using sawhorses as tables, man power to move things around, and generally just doing my best to keep things repeatable. Between questionable thermometers in the mash tun and liquor tank, I really had to do my best with what I had. Doing the same recipe a couple times usually meant getting two different beers.

First thing I wanted to do was to get a good solid base to build up from. I had a pretty good idea what kettles I wanted to use in the end, so that gave me some rough measurements to start building a stand from. After reading a ton online and looking at half a million different setups, I finally decided to learn how to weld and make a single tier stand. I used 1.5″ square steel tubing and with the help of a cousin, was able to get all my parts cut and tack welded together. It was then up to me to fill in all the welds and grind it down to clean it up a bit. I settled on expanded steel for the bottom shelf, high temp black paint for the top, and a gloss green for the rest of the stand. It got 2 BG-14 burners from Amazon installed and a custom gas manifold to run everything. Many weeks, one chugger pump, and LOTS of swearing later, I finally had the stand built.

Getting the stand built was one of the biggest upgrades my brewery has gone through, but there have been many, many more substantial changes over the last year.

For now, I plan to end the brief history of Ornate Brewing Co. a year in the past, but there are plenty of new and exciting posts to come soon! 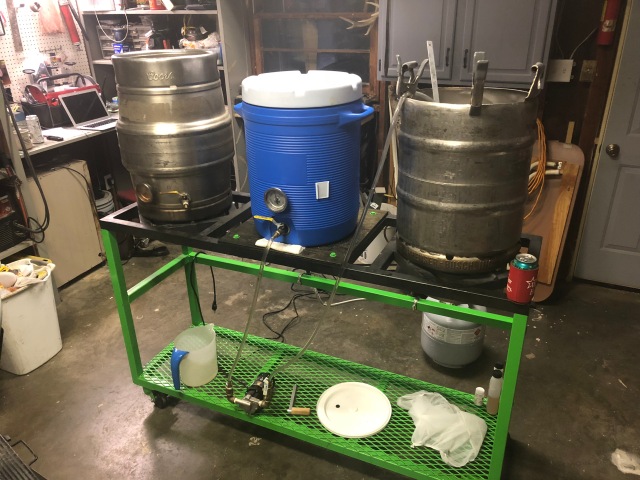 Ornate Brewing Co. is a homebrewing based outfit in Manhattan, KS specializing in intricately designed beers and never-ending equipment upgrades.